If you follow me on Facebook/Instagram then you know that Ginger has really become one of the family here at Chez Depre.

No dog will ever replace precious Molly. And that was not the intent when Ginger arrived. She is truly her own personality. And has inspired the catch-line of “Let’s get the 2yr old” whenever we find ourselves dealing with the antics she deals out. She is a ball of energy and is certainly keeping us on our toes.

Ginger is a rescue dog. She came to us thru Midwest Dachshund Rescue (MWDR). We discovered this rescue organization when we initially went looking to adopt a second doxie, a friend for Molly, several years ago. Unfortunately Molly wanted to be a single dog and have all our attention for herself, so that adoption didn’t happen, but we knew when the time came we would be supporting/working with MWDR.

MWDR is based in northwest Indiana and cover doxie rescue for Indiana, Illinois, Wisconsin and lower Michigan. I have see them stretch into Iowa occasionally. They also have a facebook page that you can follow. You can find it here.

In January I was thrilled when the president of MWDR asked if I could make a fundraising quilt for their big event in May, the CrossTown Bark Around. You can find details about the event on their website/facebook page.

I quickly got to work on a simple yet full of fun design for the quilt. I shared this process on my facebook page, and here is the top ready for binding…and a diva doxie.

At this time I am not sure if they will be able to sell chances for the quilt online. The quilt is on it’s way to them today and hoping they have time to set something up to do so and if they do I will post a blog with links as soon as possible as I know sever people have inquired.

The quilting was done by Quilters Quest of Woodridge IL. A fun dachshund and paw print panto. I swear they have designs for everything there and Bob & his quilty staff, both in the longarm dept and the actual store, are top notch!

And the label. How awesome is this label. My friend Joelle Guay is quite the artist and has found her calling in designing and selling custom labels for quilts. To me these labels are like bows on a present. The open area is for your own personal handwritten message and/or signature.

She also designed labels for my Tussie Mussie quilts. Look how she pulled elements of the quilts into the labels. And of course Ginger is quite the picture diva. She runs to be in all pics now when she sees the phone go sideways…lol!

She also does simple, non custom, but equally beautiful, labels that you can order in bunches and have on hand for your finishes.

If you are interested in contacting Joelle about some labels you can reach her here on Facebook to send a message .

Off to spend the rest of the day puttering with some studio time. As projects are being completed more open sewing time is entering my life and more ideas need to come to life!

Tags: doxie
Posted in Doxies, Family, from my studio | 1 Comment »

A Quilt for Doxies

Ginger is our dachshund. She is a 2 year old smooth red mini (just barely by a few ounces we say…lol) doxie. She is our second doxie.

Molly, who preceded her crossed the rainbow bridge last August at the age of 17. We adopted Molly at the age of 9 from a local shelter. And soon there after we discovered Midwest Dachshund Rescue. We attempted to adopt a second doxie from this organization after having Molly in our lives for a few years, but unfortunately at age 13 she wasn’t having it. She had lived a hard breeder life before finding us and she was enjoying life as an “only doxie” so that is how it was – and we love it and her.

Last December, Ginger entered the household and quickly took over. We intended to adopt another senior or two as we love Frosty Faces but Paul took one look at Ginger on the Midwest Dachshund website and declared she was for him. In fact his very first words upon meeting her Dec 11th face to face were “I love you already” as she leapt into his arms as he kneeled down to her. It was a match made in heaven.

A few weeks ago Midwest Dachshund Rescue asked if I would make a quilt for them for their annual fundraising event, Cross Town Bark Around, that takes place on May 18th this year.

With not much time and all the “Sweden Crazy Time” happening at our abode I thought keep it simple Mic. So I grabbed the Doxie & Balloons fabric from my stash and thought – perfect scale for the center of 8″ Sawtooth Stars blocks.

I only had enough of the paw print background fabric to make 15 blocks. I needed 30 for my 5×6 setting plan. But that is ok I could use 3 other fabrics of the same look – black and white print- and make 5 blocks each. It will make the quilt more appealing to the eye I feel then a second set of 15 blocks. Changing up the prints, scale of prints and having 5 of each vs 15 will make the eye dance around the quilt. Then I hit my bright scraps and make each block have it’s own set of matching star points.

Sashing needed to be colorful. But I didn’t have enough yardage of any fabric I liked in my stash. Then it hit me. Solids in a rainbow ombre setting. Everything is cut – let’s get those rows pieced together!

The center is done!

and VIOLA! it’s ready to go off to Bob at Quilters Quest for quilting. I am seeing a dog paw panto in a soft rainbow colored thread. I will bind it using the same fabric as the last border and get it to MWDR for promotion and the event. I am hoping they will have online sales of raffle tickets for the quilt, several people have already asked about purchasing chances on the MDQuilts facebook page. If they do I will post a blog with the link.

Doxies have a way of getting under your skin and into your blood. Before you know it your surrounding yourself with short legs, long bodies and big hearts.

Tags: doxie
Posted in Doxies, Family, from my studio | 1 Comment »

Ginger is a 2 yr old smooth red mini doxie. Wait a 2yr old? Didn’t we say we wanted to adopt a couple of seniors??

Yes we did. And we tried in earnest thru the rescue organization we chose for the last 4 weeks. But each time a roadblock popped up. Serious medical issues so the dog couldn’t be released, being several people back in a line, conflicts between coupling up two dogs….it just seemed like an invisible hand was holding up a stop sign at every turn.

When we got the news that a senior male we had our eye on to adopt along with a senior lady (who had some med issues arise) was adopted before we had a chance to even discuss the pairing with the rescue team and well I was at my emotional end.

The problem is Paul and I didnt make our selection(s) on the fly, we contemplated each dog to the point of imagining them in our house. And this with this guy we had already even renamed him (trust me he needed renaming). So each roadblock was a small heartbreak. I just couldnt go there anymore.

And our senior lady may not ever be available for adoption again as her medical issues were going to take some surgery and possible months of follow up care. Again more heartbreak.

I told Paul we needed to take a break on the dream.

We went to bed thinking…ok we will end the year sans dogs and revisit the idea in late March/April.

Then 7 hours later Ginger came into our lives. Paul saw her and he fell hard. He asked me to try one last time. He said I know she isn’t a senior but she will be one someday and based on Mols life we could enjoy 15 years with her. I said yes.

We immediately messaged our intent. And then we waited.

A few hours later we heard her story.

She has had nothing but revolving doors in her young life and this has caused severe anxiety. Enough so that she has had 3 foster families in 5 weeks as she just can’t handle being with some dogs. So adopting Ginger would mean no other dogs. Just Ginger. It would be a bit of a bumpy road with her. She is going to need some serious time.

And then 6 hours after getting that info, digesting it and deciding to move forward with Ginger…we got a call telling us the senior guy was available again as his adoption fell thru.

Oh my gosh now we are back in a whirlwind of emotions and decision making.

We agonized. And then made a decision. We would be a one dog family again. We would let the dream go of a small pack of doxies at Chez Depre.

And then a friend said these words to us. She said that Ginger needed us. She needs the love, security and patience that we will provide her for the rest of her life no matter what her age is. She needs you.

Those were some very sweet words to hear.

We released the senior guy and found out immediately that another couple was waiting in the wings for him…just waiting for our decision. So we felt we made the right choice.

And so now as you read this we are driving to pick up Ginger.

We have been down this road before. But it is possible to “undo” a good portion of her anxiety at such a young age. Our vet told us with Molly that traumatized dogs usually need the same amount of time in a secure loving home to wipe out the time in the environment that caused the trauma in their memories. So at age ten as Molly was when adopted she would need ten years. Ginger is two. We may have a chance to give her a life without anxiety.

The first stage of our plan is I won’t leave her side for 3-4 weeks so she realizes she can count on me. And then slowly we will venture out for 30 mins, then an hour, always returning with hugs and kisses. We will make her feel secure and loved. We will let her know we will always be here and she can count on us. 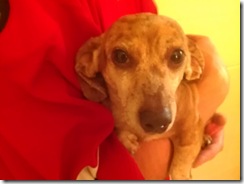 We adopted a dog.

She rules the roost.

I have a feeling she is going to inspire a lot of quilts. 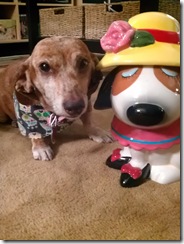 It’s bigger than her.

But she goes crazy whenever we go near it.

She is very smart. 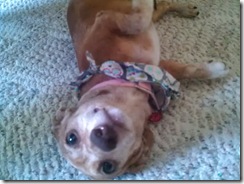 She keeps us laughing with her antics like scooching across the carpet from one to another for some belly scratching.

Too much effort to actually get up and walk…. lol. 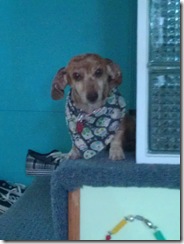 She likes to sit on the top stair to my studio and watch me ….like a gargoyle.

Those glass blocks next to her are 6 inches high each…yep she is tiny. 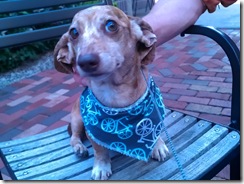 She has everyone at Starbucks snookered.

She likes to sit up a bit so she can see more than ankles. 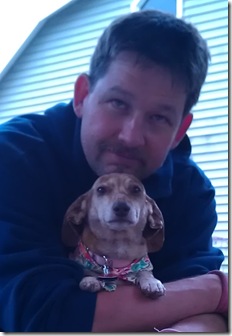 He claims she is my dog.

But that is just the cover story.

She has him right where she wants him…wrapped around her paw.

Tags: doxie
Posted in Around the House, Doxies | 8 Comments »